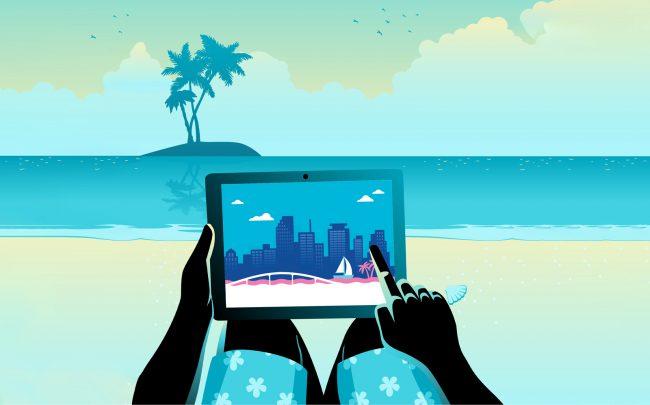 South Florida could benefit from the pandemic, as companies look to take advantage of tax benefits, weather and more affordable housing costs

In late February — before Covid-19 became a pandemic — Spotify inked a lease for 20,000 square feet to house its South Florida headquarters in Miami’s Wynwood neighborhood.

The music streaming service’s deal for all of the office space and large courtyard at the mixed-use development Oasis at Wynwood on North Miami Avenue was another sign of momentum for TAMI (technology, advertising, media and information) companies taking office space in South Florida.

But then coronavirus hit, prompting nearly half of the American workforce to set up shop in their homes and leading Twitter and Facebook to announce work-from-home policies that could lead to a potential void in the office markets in New York City and Silicon Valley.

South Florida, however, could benefit from the pandemic.

As residential brokers in the area report an uptick in sales and rentals largely fueled by homeowners fleeing dense markets like New York, office brokers say they’re starting to see a similar trend play out among tech firms.

Cushman & Wakefield’s Brian Gale, who was part of the leasing team that closed the deal with Spotify at 2335 North Miami Avenue, said he’s given five virtual presentations to major tech brands to take large spaces at 830 Brickell — one of South Florida’s largest office projects under construction

OKO Group and Cain International are building the 57-story tower, which the developers say will be anchored by WeWork, with an expected delivery date of 2022. The property will have 490,000 square feet of office space, and will mark the first major office building to rise in Miami’s urban core in the last decade.

As with most office landlords and leasing agents in other cities, South Florida’s office brokers aren’t convinced that working from home will become a long-term result of the pandemic. Companies that were looking to take advantage of the tax benefits, weather and more favorable housing costs are still planning moves to Florida, according to local real estate players.

“Companies like Twitter put their foot in their mouth too early. I believe that it’s really hard for people long term to work from home,” said Daniel de la Vega, whose firm One Commercial is marketing Creative HQ, an office condo in downtown Miami.

“Only the really wealthy ones would move in the past, the Barry Sternlichts of the world,” he added. “But now people our age want to get out of the major cities and they want to come to Miami and Fort Lauderdale.”

Ripe for the picking

Commercial brokers are negotiating a number of “blend and extends” where the landlord offers some free rent or concessions in exchange for longer leases. And for new leases, prospective tenants with the budget to do so are more concerned with building measures and office floor plans that follow the latest public health guidelines.

“Unless a landlord has got a lot of capital saved, it’s an ideal time for tenants to restructure leases. We’re going to see the markets change in favor of tenants.”

Keith Edelman, Colliers International
Carpe Real Estate Partners’ Erik Rutter, one of the developers behind the Oasis at Wynwood, said larger spaces and the ability to be outside will prevail, he argued.

“There will still be a demand for office space. The growth of Miami will continue, if not be propelled by, this pandemic,” Rutter said.

While some brokers believe there will be hesitation about returning to a high-rise office building versus a suburban, low-rise corporate campus, Gale said he’s negotiating nearly 200,000 square feet of proposals at 830 Brickell. Those conversations include one with a major tech tenant that is “very serious” about opening an office in Miami, he noted,

“People now are looking at new buildings as having better air quality, giving tenants the ability to really plan out how they’re going to look post-Covid,” Gale said, adding that many “are concerned with mass transportation and being on top of people” in New York City.

People who run their own tech startups or work remotely for larger companies are increasingly relocating to South Florida, said Breslin, the founder of Refresh Miami, a nonprofit that focuses on tech networking in the city. He said he believes more companies will follow recent WFH policies put in place by Twitter, Facebook and Shopify

“Most people don’t have it in their budgets to space out employees six feet apart,” Breslin noted. “It would be unwise for us to think this is a short-term thing. A lot more of the traditional tech companies are rethinking their hiring processes.”

Keith Edelman, executive managing director of Colliers International South Florida, said most long-term deals are on hold as companies evaluate their office setups, which could put pressure on rental rates.

Edelman, who recently returned to his office, had been working remotely for more than two months, speaking with The Real Deal from his car. He said he believes work from home culture could take a toll on camaraderie and collaboration among employees — giving office tenants an incentive to be proactive in their leasing negotiations.

“Landlords are scared,” Edelman said. “Unless a landlord has got a lot of capital saved, it’s an ideal time for tenants to restructure leases. We’re going to see the markets change in favor of tenants.”

Investment firms, insurance companies, hedge funds and family offices have also been making the move, driven by the lack of a state income tax.

The Miami native plans to make the 2,678-square-foot property at 3634 Northwest Second Avenue the new headquarters for her firm, which counts Mastercard, Univision, NBC, Viacom and Green Valley Organics among its clients.

“A lot of our employees up here have asked if they could transfer,” Rubinstein told TRD in April. “Miami is such a good market for talent so I also want to take advantage of that now.”